The first thing for any bee of the hive, even the newest Honey Gatherer to learn is the proper salute by which you’ll greet fellow members of the Hive, and then give the Call to rally the swarm.  Womanho!  Womanho!  Sing with me!  Next, you’ll want to work on your cell filling, and your bee lines.

So, the point of all this is to fill in some history, where only a title remains (beehives).  The words last longer than the original thing picked out by them, and in this case there was a lot which was left behind.  That is, this little pamphlet shows that a once thriving program which educated young women in everything from cooking to building shelves, from botany to naming the constellations was once part of LDS “religion”. 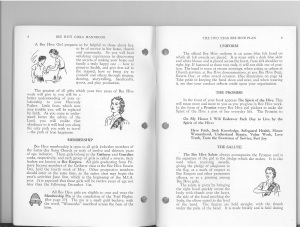